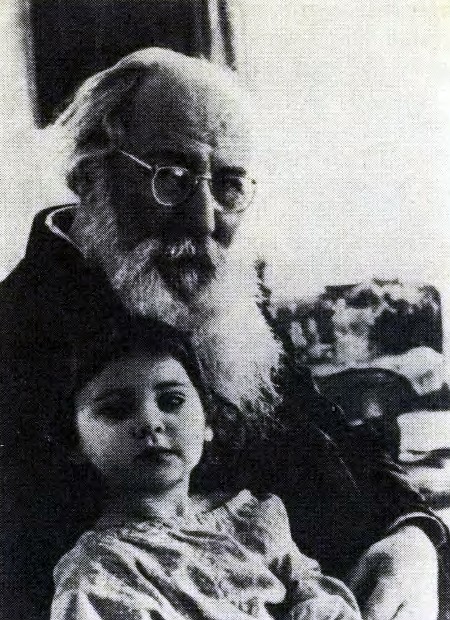 Favorsky's world is striking above all for its breadth. He was a graphic artist who illustrated the world classics with great intelligence and understanding, a stage designer, a pioneer in applied art, a superb draughtsman and water-colourist, and an art historian with original views.

Whatever Favorsky did, his approach was extremely serious and responsible, for to him all work was of equal importance. Whatever he happened to be working on at a particular time of a particular day enjoyed his keen and whole-hearted attention, whether it was a cycle of huge mosaics, a trademark for a reel of cotton, a frontispiece for "Hamlet" or a decoration for a plate - perhaps a shepherdess and her flock.

Forty or so years ago Favorsky did a cover design for the magazine Makovets, which was published by an artistic society of the same name to which friends of Favorsky belonged; the society's other name was "Art is Life", and I feel that this formula can be aptly applied to Favorsky's work. He was completely wrapped up in his art, and thought of nothing else. He had his finger on the pulse of the time, and that was why he was one of the greatest Soviet artists. He always remained true to himself, had tremendous integrity in both thought and feeling, and this was reflected with clarity in his work, in everything he did. Here, for instance, is a characteristic picture of Favorsky at the beginning of the thirties. He sits with a mass of work at a long table by the solitary window in a small poorly-lit crowded room facing the courtyard of the old building of the School of Painting, Sculpture and Architecture in Moscow.

On the opposite side of the table, similarly engaged in engraving, is Mikhail Pikov, who also lives here. On a trestle bed by the door leading into the corridor sits Nikita, Favorsky's son, planing away at a block of wood destined for a sculpture, and shavings are flying all over the room, even onto his father's table.

Suddenly, from some remote part of the flat comes the voice of Istomin, another artist: "Nikita, the water in the kettle's boiling away!" And Nikita flies out. Favorsky stares silently in faint astonishment over the tops of his glasses at the point where Nikita was last seen and then exclaims: "Impetuous youth!"

Favorsky was already an eminent artist, .yet he saw nothing incongruous in living and working in such unsuitable conditions, and spending only the week-ends in Zagorsk, near Moscow, where his family lived. Thirty years later things were more or less the same. He had a large studio, but as before, he sat in the farthest corner, and had to push aside piles of paper to free a place on the table in order to display his latest engravings. All the space in the large high-ceilinged room was occupied by enormous lumps of marble on which two sculptors living in the same house were working. One could not say they were simply noisy; they were thunderously, crashingly noisy. This time stone chips were flying about the entire studio, and Favorsky paid not the slightest attention to any of this but went on calmly explaining the ideas behind his latest series of illustrations. 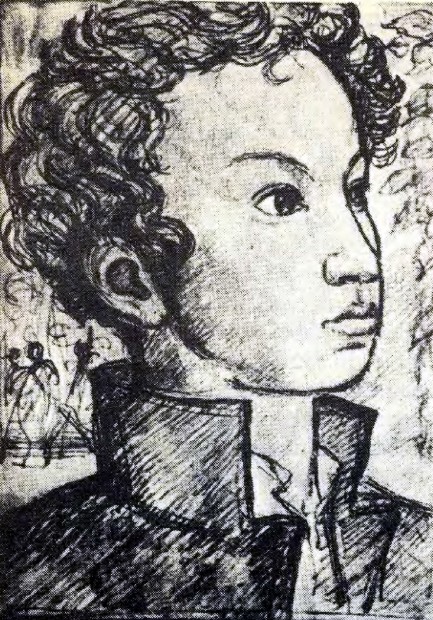 Pushkin as a schoolboy by Vladimir Favorsky.
Pencil drawing on paper.

He received the news of the deaths of both his sons during the war with the utmost restraint and outward calm. He considered it their justified sacrifice for the common cause. His wife was hit very hard, and became an invalid, afraid to let her husband out of her sight. For years he hardly left her bedside, trying to infuse her with at least a tiny spark of vital energy. But those who only knew Favorsky from his work could have no suspicion of such a family tragedy in the Igor's Host" and "Boris Godunov". It is true of the engraved portraits of Dostoevsky, the young Goethe, and his pencil portrait of Pushkin as a schoolboy.

A whole world of complex, powerful characters evoked with psychological depth and subtlety, a whole world of wonderful poetic images overflowing with dramatic or lyrical feeling, is represented in these multifarious works of Favorsky's, which are concerned with various epochs and nations.

These images of the past reveal a magnificent and humanistic continuity of time, with the utmost simplicity they form a bridge to images of our own time - for instance, to the mosaic "1905", the engravings "Years of Revolution", to a beautiful allegorical image of man giving his own fiery heart for the peopled

But from this main epic, heroic current in his work, which brought him close to Petrov-Vodkin and Deineka, Favorsky was able to switch simply and easily to quite different themes and images, some elegantly lyrical, some humorous and mischievous, and some with a humdrum, everyday air. He first began to produce his characteristically tranquil oil-paintings of nature before the Revolution, and of these landscapes with their meadows and groves he was to say in later years: "That encounter with Nature was an honest one." All his subsequent "encounters with Nature" were just as honest.

Favorsky's Nature always had its pristine purity and clarity, its strict spatial relationships and scrupulously conveyed subtle effects of atmosphere and light.

He was also given to wit, ingenious humour, sudden amusing nights of fancy - on the surface quite out of keeping in such a wise and learned man who made a habit of exploring the human soul and analysing the development of human passions.

Favorsky, until then unknown, won fame for his series of engravings for Anatole France's "Les Opinions de Jerome Coignard", in 1918. This series also marked the beginning of a rapid development of Soviet wood engraving along highly original and brilliant lines. It was the first experiment in designing a book as a whole, with illustrations and general appearance in keeping with the content and stylistic qualities of the literary work.

He did not develop his experiment on second-class works, but built up his expertise in the course of work on literary classics - the story of Ruth, Pushkin's "The Cottage in Kolomna", and so on.

It is interesting to note that apart from one or two cases (for example, "Othello") Favorsky had no failures in his illustrations for great literary works.

Among the most brilliant of Favorsky's stage designs were those for Shakespeare's "Twelfth Night". The decor was amusing, infinitely ingenious and inventive, full of life, and with genuine Shakespearean power. It was only in name that his role was that of artist. In fact he controlled the entire production, subjugating by his charm not only the director but all the performers in this strikingly integral, bold and sparkling spectacle.

When he went out with the actors to take a bow at the end of the performance in response to the loud and continuing applause - a tall, upright figure, with a greying beard and wearing a rather informal black windcheater, his eyes screwed up against the bright lights - he gave the impression of some old wizard whose sorcery had summoned up from nowhere this brilliant, joyful and gay world shimmering with all colours of the rainbow. Not only the audience got this impression, but the actors too. I felt that in Favorsky's purity of spirit there was always something a little childlike, a child's delight in the mysterious wealth and beauty of the universe, just as much ever-fresh enthusiasm for the unlimited possibilities of creative invention, just as much natural and innate nobility.

Favorsky on himself and his work

In my youth I loved and admired the early Renaissance artists: Giotto, Masaccio, Niccolo Pisano, and I studied them like an art historian, travelling to Italy to do so. Later, when I discovered early R ussian painting I considered that this was the most interesting of all to me. It was the direct continuation of the great art of Greece, yet at the same time had profoundly national Russian features.

* * *
When I was young I studied painting, and I was a promising pupil. I might even have become a good painter, perhaps, but I preferred graphic art. I did so because it was more within reach of the people, more of a mass art.

Paintings can only be seen by visitors to museums and art galleries. The graphic artist can enter every home, through book illustrations and prints - taken by himself from his own original. Understandably enough, during a time of revolution, when the mass of the people are in a state of awakening and upsurge, and there is a constant growth of interest in art, the graphic artist has a big role to play.

* * *
However strange it may seem, a good literary work is easier to illustrate than a poor one. On the one hand it uplifts the artist, and on the other, it sets him difficult tasks. .

Shakespeare, of course, is good to illustrate. It is typical of him that all his works convey action.

Action is his language. Furthermore, his characters are complex - flesh-and-blood people, not primitive representatives of evil or primitive doers of good.

In his sonnets and tragedies Shakespeare touches on all aspects of morality, and one can say that to him nothing human is alien.

Many illustrators have turned to Shakespeare, and it is impossible to pick out the most outstanding of them. What I should like to see is an edition of Shakespeare containing all the illustrations done by Moscow artists. 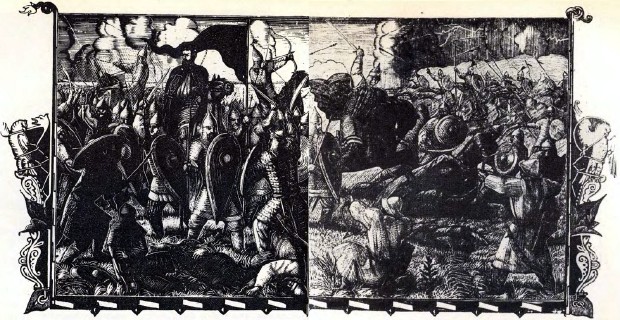 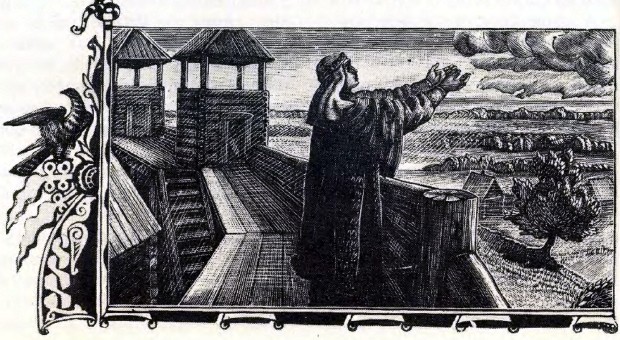 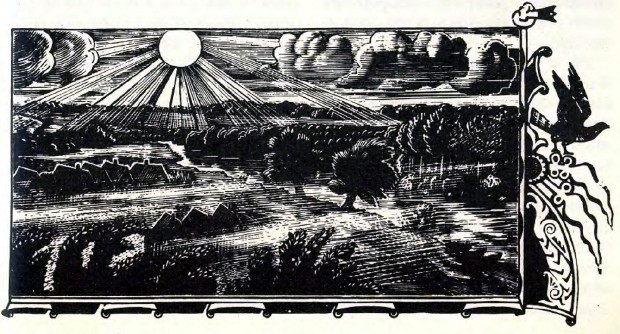 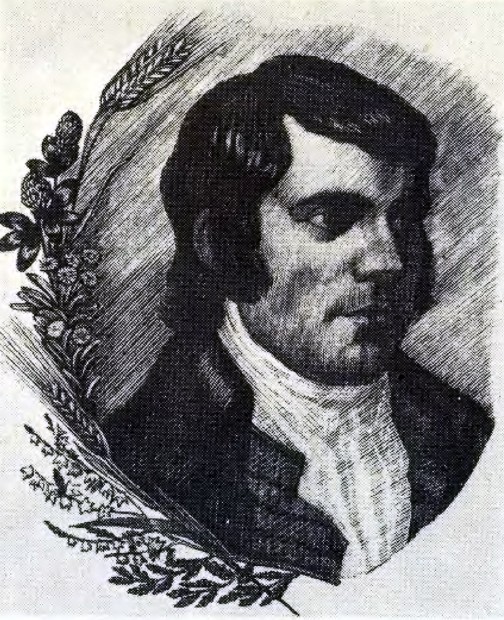 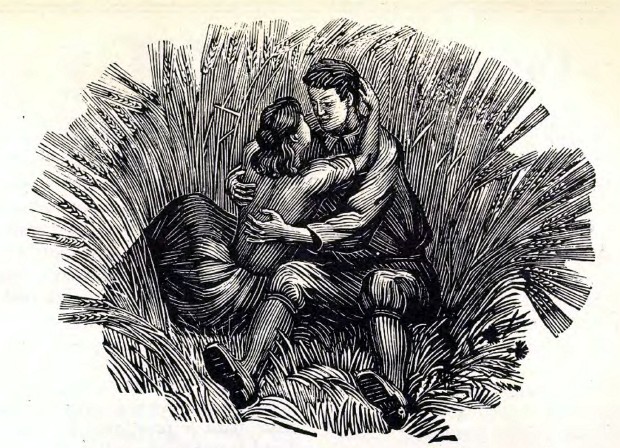 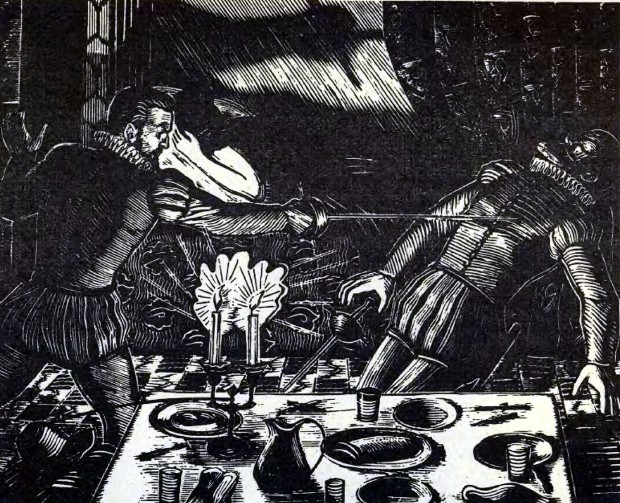 Illustration to Pushkin's "The Stone Guest". 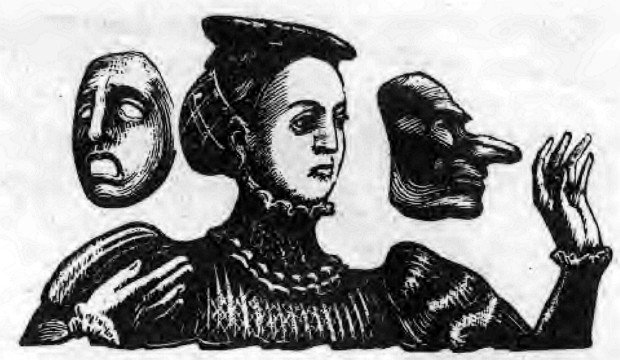 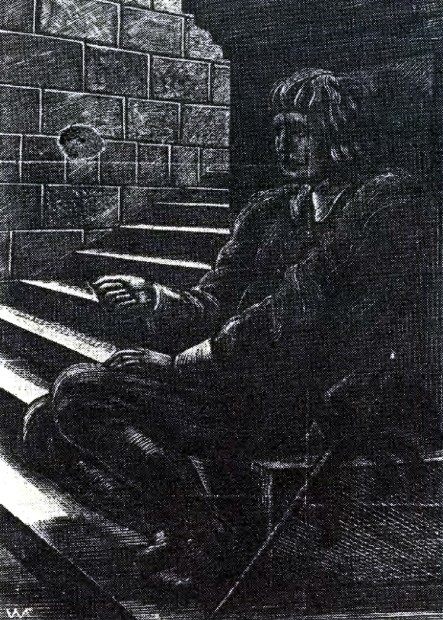 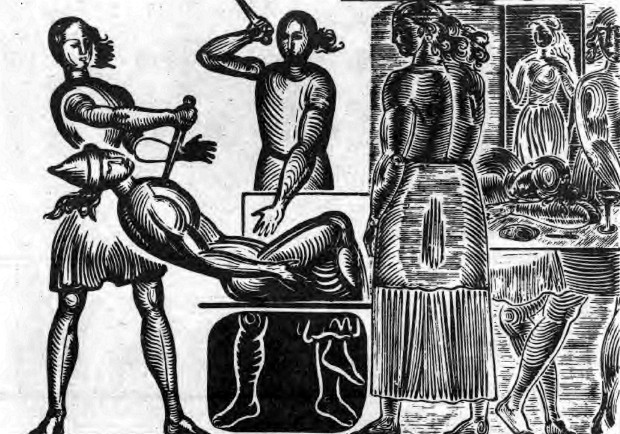 Frontispiece for Act III
of A. Globa's tragedy "Famar"
(one of Favorsky's early works). 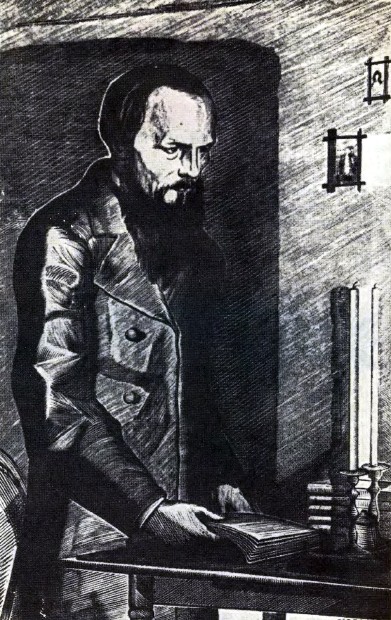 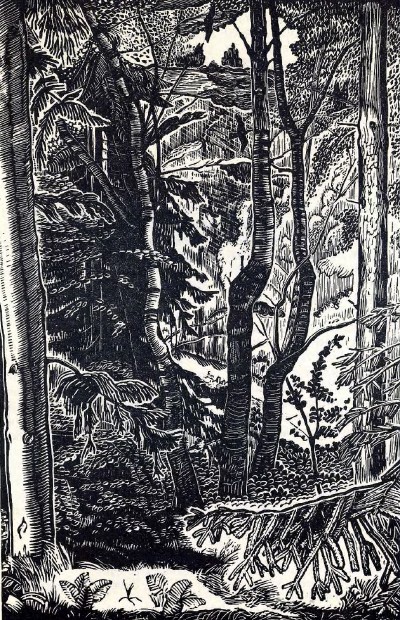