Painting: Visegrad, 1830
Oil, canvas, 58.5x83 cm
Purchased in 1890
Before settling down in Italy Marko painted a whole series of landscapes of the Tatra Mountains, the Carpathians and castles and castle ruins. Edith Pogany-Balas dates this painting of Visegrad, a landscape built upon a fresh harmony of greens and reflecting a concrete experience of the countryside, as painted in 1830. The artist chose a viewpoint displaying the Danube Bend between the mountains, and including both banks of the river. The keep is in the middle distance and the wall, running uphill, directs the spectator's eye to the ruins of the castle built on the summit. This landscape reveals the practice pursued in designing stage sets, in which the foreground, the middle distance and the background are clearly separated from one another. But by painting ruins from one of Hungary's past periods of glory this picture indicates more than the Classicist aspect of the landscape and reveals the influence of Romanticism. 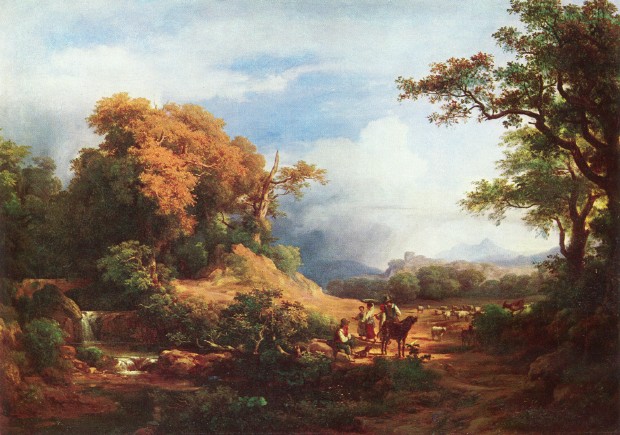 Painting: Landscape of Appeggi, 1848
Oil, canvas, 39.5x55.3 cm
Signed bottom right: C. Marko p. Appeggi 1848
This picture, composed of various dramatic elements, might be taken as a good example of the Classical structure of landscapes, made even more enjoyable by Marko's skill and the assurance of his style. This is no longer an instance of geographical fidelity - as Visegrad - the principal aim being to present the view effectively. Groups of trees enliven the foreground on both sides. Like a stage set their dark colours provide the frame. The action itself is placed in the middle distance, where a group of rural people in conversation can be seen. But further sights guide the eye to the background where, according to the rules of colour perspective, the green vegetation of the distant chain of hills, seen through the veil of the air, turns into darker and lighter blues. The grey, woolly clouds on the sky are the harbingers of a summer thunderstorm.