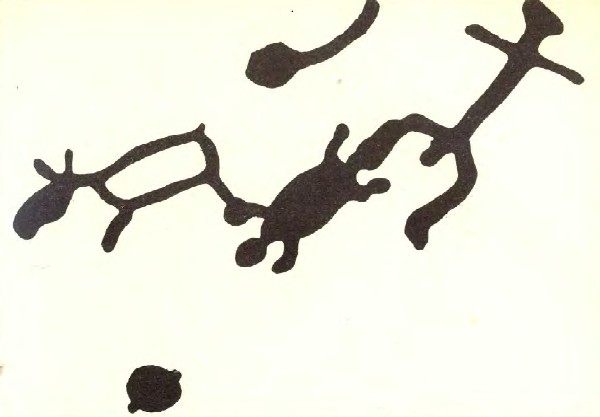 This amazing picture was the work of an artist who lived in North Karelia forty centuries ago. As soon as the rays of the setting sun fell upon the rock drawings the elk, the hunter and the frog came alive.

Karelia is a land of lake and forest, mist and rain. It has 40,000 lakes, among them Ladoga and Onega, the two largest in Europe. There is pine, spruce and the famous Karelian birch in abundance. One-fifth of this northern region is swamp land; fog often blankets the forests and lakes ... rain drenches the earth ... the summers are cool.

In Karelia, archaeologists have unearthed hundreds of Neolithic (3000-2000 B.C.) settlements, and it is estimated that Man first appeared here in 6000-4000 B.C. Many rock drawings - masterpieces of primitive art - have been found.

About 600 drawings have been discovered on the eastern shores of Lake Onega, a picture gallery it took centuries to create. With tools made of rough stone, the primitive artists hewed human figures, animals, birds, fish, reptiles, fantastic creatures and symbols of the moon and the sun on the hard granite surface. They must have had a clear concept of what they wanted to depict, keen eyesight and steady hands, for one false blow of the sharp stone could ruin a picture. Granite is a "canvas" which cannot be worked over.

The selection of the site for the pictures is interesting. It is on the edge of a cliff by the water. Only rarely did an artist go more than a few feet from the shoreline. But it was obviously inconvenient as well as dangerous to work on a cliff over the deep waters of the lake. There are so many safer and more convenient spots nearby. Why did the artists ignore them?

Rock drawings are best seen in the slanting rays of the setting sun, and it is clear that the artists selected the location not out of love for risky ventures, but because of the light effect.

I had the good fortune to see some of the drawings during the summer solstice. It was on the third promontory of Perinos, where there is an especially large collection. The composition here is extremely interesting. It could be called the "Crime and Punishment of the Frog".

Before sunset the drawings looked dim and were hardly distinguishable from the background. But as soon as the sun was close to the horizon, the dark-red, polished granite glowed with a soft pink light and the multicoloured lines of the drawings were thrown into prominence.

This wonderful performance can be scientifically explained. Granite has a grainy structure, but it polishes well. The granite on Lake Onega has been polished for thousands of years by water, whereas the line drawings on the smooth surface of the cliffs retained the grainy structure of the rock. The sections of the drawings filled with a myriad of tiny crystal prisms reflect much more light than the surrounding smooth surface. This is why the drawings suddenly "come alive". But this light effect is not their only unique feature.

As soon as the rays of the sun touch the cliff, the drawings become animated. The frog approaches the elk, the elk paws the ground, the hunter makes a motion with his hand (one's imagination easily fills out the story: the hunter has just thrown the axe with his right hand and in order to keep his balance spreads his left arm), the axe above the frog wavers (the blow is coming!), the camp lire nickers. The performance on the granite screen lasted for a quarter of an hour. Then as the sun disappeared beneath the horizon, the drawings faded. 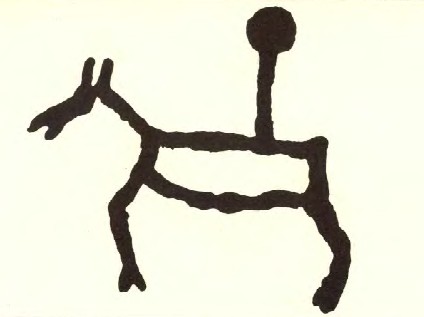 And here is the sun riding a deer. These rock paintings have become a great tourist attraction.

Another miracle! But there is an explanation for this, too. Think of electrical advertising signs. As the electric bulbs are turned on and off, the light from the bulbs appears to our eyes like running lines. The same effect can be observed here. Groups of minute prisms on the uneven surface of the drawing act as the "bulbs". At different moments some get more light than others. So the intensity of the reflected lights is also different: some lights are brighter than others.

On the cliffs two light streams merge: one comes directly from the setting sun and the other is reflected by the surface of the lake. Both sources of light are in motion. As the sun slowly descends over the horizon, the angle of incidence of the light is constantly changing. The water, on the other hand, plays the role of a vibrating reflector. And, as the rays move, they cause different groups of prisms to scintillate. To the viewer this movement of patches of light along the drawings becomes the movement of the drawings themselves.

With great ingenuity the "primitive" artists found those spots on the cliff where the incised figures would "come alive" at a certain time. They had to consider the slope of the cliff, the barely detectable curvature of its surface and its distance from the water. The drawings were not made in colour, but as the angle of incidence of the sun's rays on the cliff changed, a wide range of colours came into play.

It is generally thought that figurative painting flourished in primitive societies during the Upper Paleolithic Age (approximately 30,000-20,000 B.C.). The famous "frescoes" of the Lascaux cave in France and the paintings of the Altamira caverns in Spain belong to this period.

The Onega pictures represent a later aspect of the art of primitive man. The Neolithic artists improved on the Paleolithic traditions of painting.

More than that, they discovered something containing the germ of future "motion pictures". It can be said that the Onega artists created the most ancient cinematography.